The benefits of a propolis diffuser (vaporizer):

Propolis has virtues that have been known for centuries. It was already used by the ancient Egyptians, Greeks and Romans for its antibiotic, anti-inflammatory, antiseptic, and healing properties.

When it is diffused in the air, it keeps all its benefits and can help relieve some forms of asthma and respiratory allergies as well as fighting diseases such as rhinitis, sinusitis, pharyngitis, and angina, while stimulating the body’s natural immune defenses.

It is also an effective way to help sanitize areas like offices, waiting rooms, medical offices, nurseries, bedrooms… and protect the most vulnerable people.

See the studies on the benefits of propolis diffusers further down this page.

The process used in our diffusers is very innovative as it reproduces the natural conditions of the air in the undergrowth. In nature the volatile fraction of propolis is diffused during the hottest days when the sun warms the buds allowing their release into the air.

In order to work, the diffuser does not require water or oil. It simply needs to be plugged into a power outlet and a propolis capsule Propolair® has to be inserted into the slot located on top of the device.

Each capsule lasts 122 hours or just over 5 consecutive days. When it is time to change the capsule, a LED flashes and a slight beep can be heard.

To change the capsule, the diffuser must be on:

·  Replace the capsule with a new one,

·  Press and hold the power button for about 10 seconds, until you hear rapid beeps,

The models of diffusers available:

They diffuse the volatile fraction of propolis into the ambient air.

The ionizer uses negative ions to remove certain harmful particles that are in the air (such as cigarette smoke, dust, viruses, bacteria...). The positive ions will be captured by the negative ions emitted by the ionizer diffuser, they then become heavier and neutral, fall to the ground and are no longer suspended in the air.

The A4 model comes with a tube and two masks* (child size and adult size) to take full advantage of propolis when inhaled, especially recommended in case of respiratory problems.

It sanitizes the air and filters out air pollution inside the vehicle, reducing the amount of harmful particles.

*The tube and masks can be purchased separately and fit on all diffusers except Propolina, Breathe and Propolair Car.

* : Aerosol option available with the tube and mask (child or adult) sold separately

There are currently five different kinds of refill capsules:

Here are the results of studies conducted in two schools in Collegno (Turin) and Milan to analyze the concrete effects of Propolair® propolis diffusers: 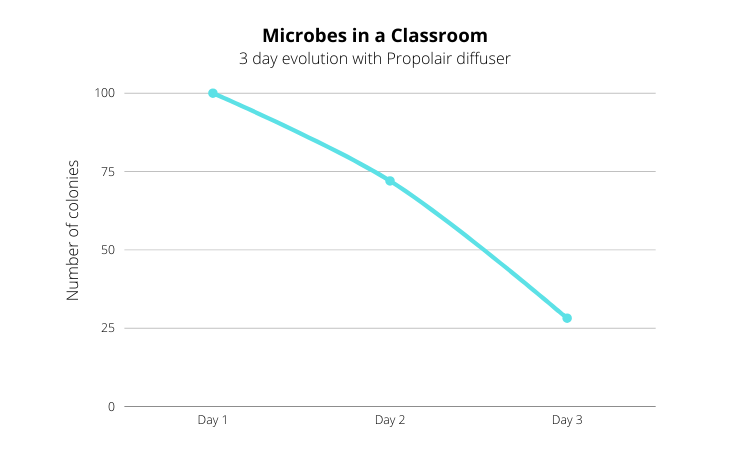 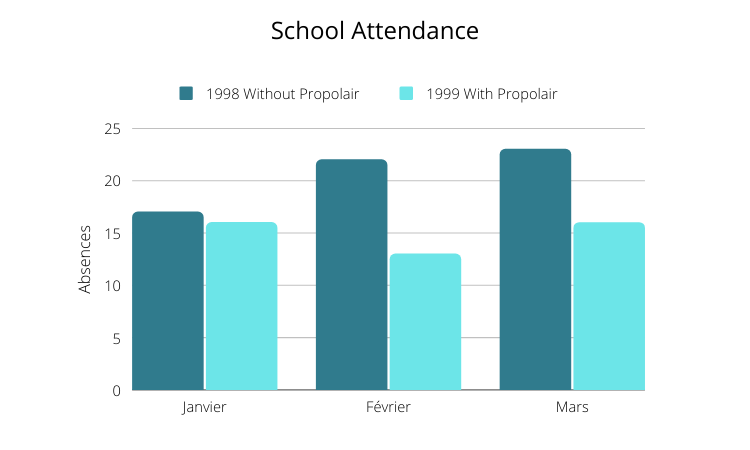 Here are the results of a study on air pollutants with and without propolis diffuser: 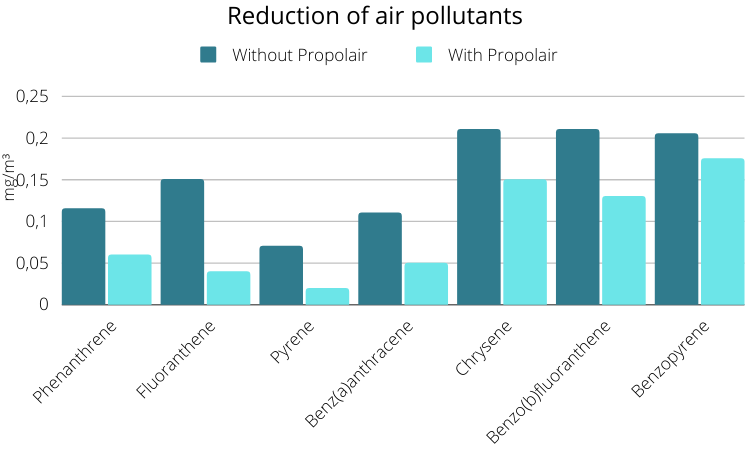 1) photo on left was an airborne sample of my 1999 Saturn's air (while driving).

3) the mold test kit can be purchased at Home Depot for $10, it is called Mold Testing by ProLabs (also can be ordered on the Internet, but you have to pay extra for shipping).

4) photo on right was taken after using the propolis for two days. Absolutely no evidence of any mold growth, not even a small pin-sized colony.

A month earlier, I did the same test in my wife's car, and got rid of the airborne bacteria. I could not believe it, so I tested twice, still no mold growth. Furthermore, since we ran out of the first little container of propolis (i.e., vaporized it into the car interior), I tested her car again after one month of non-use of the propolis, and still no evidence of airborne bacteria mold growth. Evidently the stuff gets stuck in the car's air circulation filter and keeps on working. I will keep testing every month until I get some evidence of bacterial growth. And I will let you know my results.

Danger of pollution in cars:

"A driver in their car is (...) three times more exposed to particulate matter than in their home or on the street" because they are "most exposed to gaseous air pollutants released by the exhausts of motor vehicles" around them.

As was found by Inserm during a study commissioned by Affset (French Agency for Environmental and Occupational Health Safety) "the passenger compartment of the vehicle is a very heavily polluted enclosure and in no way represents protection against external pollution".

"The Propolair Car® propolis diffuser diffuses propolis into the vehicle's interior. Simple to use, it plugs into the cigarette lighter and allows you to benefit from the benefits of propolis in your car. Indeed, propolis contains volatile essential oils that present anti-infectious activities useful in case of influenza and various ENT pathologies.

In a practical way, the diffuser makes it possible to create a pleasant atmosphere in the passenger compartment while sanitizing the respiratory tract of passengers: it is therefore particularly suitable for people who make long daily journeys and who suffer from various respiratory pathologies.  »

Doctor of Pharmacy, Researcher in Ecology and Biology.

If you would like more information about propolis diffusers or anything else, do not hesitate to contact us.
We are at your disposal.
‎The Chez les abeilles team‎.